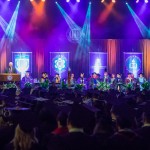 The gonfalon, a flag that hangs from a crosspiece or frame, originated in the medieval republics of Italy as an ensign of state of office.

Gonfalons have been adopted in many universities around the world as college or institutional insignias.

The gonfalons displayed represent the academic areas of Northwestern State University. The colors of the University, purple and white, are joined together in a pattern common to all flags.

The President’s Chain, presented to the University as a gift from the Honor Society of Phi Kappa Phi in commemoration of the 125th anniversary, holds the seal of the University, which is cast in bronze. Each platelet bears the name of a former president of Northwestern and the years he served. Chains of similar design have been worn for centuries during ceremonies at universities. This chain is unique in recognizing the leaders who have served Northwestern while most others are original works of art.

The President’s Regalia was designed by the Student Government Association on behalf of the student body and symbolizes the mutual trust, respect, and collaboration between the students and the University Administration. Academic regalia dates back to the Medieval universities of Europe and is based on clerical robes worn at that time. 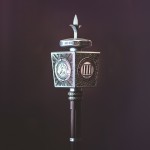 The Mace is crafted from dark walnut and silver-plated solid bronze. It bears the seal of the University and features details of oak and pine. The Mace is topped by a silver fleur-de-lis finial, symbolizing the French heritage of the area and is encircled by the original Latin motto of the school, “Educatio Adulescentis Est Civitiatis Salus (The Education of the Youth is the Salvation of the State).”

The Mace originated as a weapon in the Middle Ages. Archers and other unmounted warriors used it as a hand arm. Sergeants at arms, who were guards of kings and other high officials, also carried maces. Gradually the mace gained a ceremonial character and became a symbol to denote authority.

The practice of wearing academic attire extends back to Medieval times and the Renaissance when teachers and students in European universities wore caps, gowns, and hoods. The long sleeves of the gowns and the deep hoods were used to carry books and refreshments. Each European university developed its own style of dress and strict rules for its design. In the United States, most institutions have agreed on a uniform design and color code.

Although the wearing of academic regalia in this country is now limited to formal occasions, the attire may be considered the mark of the professional scholar and teacher. The style and color serve as symbols of academic achievement.

Holders of the associate, bachelor’s, master’s, and specialist’s degrees wear purple gowns; the pattern and trimming differ for each degree. Originally, the bachelor’s gowns were made of serge or worsted and the master’s gowns were made of serge, worsted, or silk; but now synthetic fabrics are also used. The master’s and specialist’s gowns are distinguished by their long pointed sleeves with a slit for the arm at either the elbow or wrist.

The doctor’s gown is made of silk and may be in a color other than black. It has rounded, open sleeves, and the trimming includes velvet facing down the front and three bars of velvet on the sleeves. The velvet may be black or the color appropriate to the faculty or subject to which the degree pertains. The Northwestern State University doctor’s gown is purple with purple velvet and white piping.

Holders of all degrees wear caps, popularly known as mortarboards, to which a long tassel, the color of which indicates the academic discipline of the degree, is fastened and hangs over the left side of the cap. Doctors and presidents of institutions may wear tassels of gold thread.

Commencement is the most important event of the academic year on a university campus. On that occasion, the faculty traditionally recognizes the graduating class by marching in procession attired in the regalia appropriate to their degrees and the institutions where they were earned. Position in the faculty columns is determined by academic rank; persons of higher rank process first. The column is led by two marshals wearing regalia in the colors of Northwestern State University. The marshals are chosen by their faculty colleagues on the basis of distinguished service and achievement.