NATCHITOCHES – Northwestern State University’s sculpture yard might be mistaken for a Little Shop of Horrors next week as faculty await the bloom of a giant corpse flower, a rare and attractive tropical plant named for the rotten-meat stench its bloom produces.

The corpse flower, amorphophallus titanium or titan arum, is a single inflorescence that can grow to nine feet or more. It only flowers once every seven or eight years and only three to five blooming events from plants grown in cultivation happen worldwide each year. Native to Sumatra, Indonesia, the plant flowers infrequently in the wild and even more rarely when cultivated.  Titan arum generally requires seven to 10 years of vegetative growth before blooming for the first time. After its initial blooming, some plants may not bloom again for another seven to 10 years while others may bloom every two or three years.

“There is an 8-year story to go along with this plant,” said Millard Mangrum, professor in the School of Biological and Physical Sciences. Mangrum calls the plant Mr. Stinky, though it emits no odor until it blooms. In 2012, he and two other botany enthusiasts went in together to purchase the titan arum corm for $75.  “It was a 2-1/2-inch corm, similar to a bulb.”  It now weighs 40-45 pounds.

By fall 2018, Mr. Stinky was over 6 feet tall with two stalks and a flowing green canopy of foliage. It had outgrown the greenhouse adjacent to Bienvenu Hall and needed a new home.

“It’s tropical and can’t take temperatures below about 55 degrees.  It has to be in a warm, humid place away from direct sunlight,” Mangrum said.  Mr. Stinky took up residence in the sculpture lab in the rear of the Creative and Performing Arts annex outside Professor Corbin Covher’s office.  Mangrum enlisted the help of biology student Abigail Poe, who earned her degree this past spring, to help keep an eye on Mr. Stinky. Last fall, the plant died down to the corm.

“All through the winter, it was in a pot and we wondered if it would flower or go through another vegetative state,” Mangrum said, explaining that the leaf stage builds up food reserves for the corm. This week a large spike emerged from the corm and has been growing 6-10 inches per day.  By Thursday, frills had appeared on the spike and Mangrum estimated Mr. Stinky to be a week away from full bloom.

The blooming of a corpse plant is an exciting event for plant enthusiasts.  The spathe, the large bract that forms a sheath to enclose the flower cluster, generally begins to open between mid-afternoon and late evening and remains open all night. At this time, the female flowers are receptive to pollination. The bloom is a large frilly-edged maroon petal with a center spike.

As the spathe gradually opens, it releases powerful odors to attract pollinators, insects that feed on dead animals or lay their eggs in rotting meat. The potency of the odor gradually increases from late evening until the middle of the night, when carrion beetles and flesh flies are active as pollinators, then tapers off towards morning.  The odor has been likened to limburger cheese, rotting fish, sweaty socks and feces. Most flowers wilt within 24-48 hours and a seed stalk will form and produce berry-like fruits before it dies back after about two months.  Then the leaf cycle begins again.

In anticipation of the bloom, Mangrum and Covher wheeled Mr. Stinky outdoors into a damp, shaded corner of the sculpture yard to await flowering. They believe the stalk will grow significantly before blooming but aren’t certain exactly what to expect and are watching with great anticipation.

“The pictures of blooms which are on the internet appear much taller than what we are presently seeing. I think it may also be tied in with habitat and its first bloom,” Mangrum said, explaining that he was careful to disturb the roots as little as possible while transferring the plant from container to container as it grew over the years. “We tried to make sure that there was ample space for growth as it passed through the growth and dormant periods.  All that being said, it’s going to surprise us!”

Mangrum and Prof. Michael Scanlan, who have collaborated on several informative science-related videos that are posted on the School of Biological and Physical Sciences’ youtube channel, are working to set up a time-lapse camera to capture the flower as it blooms.

The corpse flower is believed to be the largest flower in the world and some botanists have called it a plant enthusiast’s biggest challenge.

“Plants are what I do. That’s my thing.” Mangrum said.  “I don’t know of another titan arum in Louisiana.” 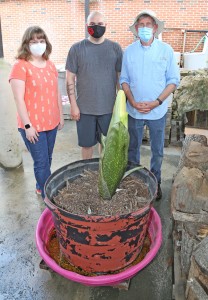 Abigail Poe, Dr. Michael Scanlan and Millard Mangrum examine the spike growing from the corm of a titan arum or corpse flower that is expected to bloom next week. The plant will produce an enormous flower with a putrid stench that gives the plant its common name. 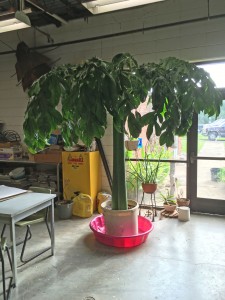 Mr. Stinky, a titan arum or corpse flower, lived in the sculpture lab at the rear of the Creative and Performing Arts Annex for two years, growing to a height of nearly 10 feet before dying down to its corm.