ARNAUDVILLE – The revival of a long-standing Cajun tradition has taken root in south Louisiana where artisans, historians and cultural authorities are cultivating interest in Acadian brown cotton and using traditional methods of carding, spinning and weaving to make blankets and textiles that pay homage to the resilience of their French ancestors.

Coton jaune, Acadian brown cotton, is an heirloom variety grown by the Acadians or Cajuns, the French settlers exiled from Nova Scotia by the English in the 1760s, who resettled in the bayous and prairies of south Louisiana. The Acadians, who were skilled in making fabrics from wool, adapted to raising brown cotton, a variety that originated in South America and made its way to Louisiana through Mexico and Texas. Fibers have natural tan shades and were traditionally used in handwoven blankets, bedding and clothing.

As interest in traditional cultural practices has grown in the last several years, weavers and spinners found the brown cotton in short supply and began approaching potential growers.  Two years ago, Jerry Hale was recruited by Mavis Arnaud Frugé, an 82-year-old activist in preserving the Cajun French language and culture, to cultivate the Acadian brown cotton.  Frugé is a native of Arnaudville, a quiet town on Bayou Teche that has become a haven for artists and musicians.

“I am a fourth-generation cotton farmer,” Hale said. “I grew up on a 7,000-acre cotton plantation and I got a degree in engineering so I wouldn’t have to spend any more time in the cotton fields.”  Hale, who still works as an engineer, graduated from Northwestern State University in 1979, and in 2017 moved to Breaux Bridge. Descended from Cajuns on both sides, Hale was drawn into the renaissance, acquired the brown cotton seeds and set out to build a seed bank, working with experts at University of Louisiana-Lafayette to get started.

Hale refers to Frugé as his cotton partner. He has two small fields at his home and the largest acreage he cultivates is at Frugé’s in Arnaudville, about 1-3/4 acres.  Since getting involved, Hale has become an ambassador for Acadian brown cotton, the weaving and textile craft and the overall celebration of Cajun culture. He created a display of photos and artifacts related to cotton at Vermilionville in Lafayette and frequently speaks to groups about the history of Acadian brown cotton, processing from seed to textiles and its links to Louisiana history.

“Brown cotton has been in Louisiana over 200 years,” Hale said. “I am a grower, not a weaver or a spinner, but I would like to revive interest in brown cotton.  I believe it was the first cotton grown in Louisiana before white cotton.”

White cotton supplanted brown cotton in popularity because it can be dyed a variety of colors, as opposed to the natural beige and butternut shades of brown cotton.

“Everyone wants white cotton,” Hale said. “Once people could have choices in color, they wanted the white cotton.” But Cajuns continued to use brown cotton for blankets and bedding.

Acadian brown cotton is currently in high demand, not only locally but by weavers elsewhere in the U.S. and Europe, where fibers are spun into thread on traditional spinning wheels and woven into fabrics on looms.  While white cotton sells for about 60 cents per pound, brown cotton sells for $20 per pound. He said one individual offered to purchase his entire crop.

“It’s in high demand because it’s all natural,” Hale said.  “We actually do the planting by hand, hoe and pick by hand. It’s grown organically with no pesticides or herbicides and is planted, cultivated and harvested by hand.  It’s very labor intensive.”

The cultural significance of the handwoven brown cotton is steeped in themes typical of traditional Cajun life:  family, faith community, resourcefulness and joie de vivre. Spinning and weaving are time-consuming and labor intensive, so women would work together to break the tedium at gatherings that often included food and music.  Upon marriage, a Cajun girl would receive a number of blankets, sheets and other items to bring to her new home. Though commercial fabrics came into common use in the 20th century, the tradition of weaving brown cotton blankets persisted. Many of those items were passed down to children and grandchildren as treasured handmade heirlooms.

“I was doing it to help the spinners and weavers, and I’m just doing it on a small scale, but more and more people are interested,” he said. “We are doing it to revive the history of Louisiana and the spinning and weaving traditions. It’s really hard work and takes a lot of time.”

Hale invites to public to visit a patch of Acadian brown cotton beginning at 5:30 p.m. Sunday, July 19 at 872 Seven Arpents Road, Arnaudville, where visitors can view the cotton in bloom and learn about its cultivation.  He encourages guests to bring cameras, chairs and boots and to wear masks, if preferred. Water will be available.

“It’s not picking time yet, but the cotton field is full of pink and white blooms,” he said. 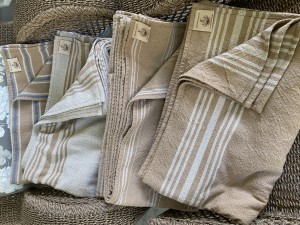 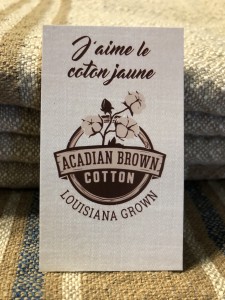 Acadian brown cotton grower Jerry Hale is pictured with Mavis Arnaud Frugé and the harvested cotton. Frugé is an Arnaudville native who has spearheaded many successful projects to preserve and promote Cajun culture, language and traditions.