NATCHITOCHES – Northwestern State University remembered Carley McCord during the Sept. 18 football game against UT-Martin by recognizing her family and the presentation of a scholarship in her name. McCord, a 2011 graduate of Northwestern, was a well-known sports journalist and digital media reporter who stayed in touch with her NSU family and was a devoted Demon supporter.

Friends, classmates, colleagues, sorority sisters and others contributed more than $108,000 to the Carley McCord Memorial scholarship, created to benefit a female student pursuing a career in sports journalism and media.

Caroline Bland of Shreveport is the inaugural recipient of the scholarship.  Bland is a graduate of Byrd High School and is pursuing a degree in communications with concentration in sports media and a minor in photography.

McCord, a Baton Rouge native, earned a degree in journalism at NSU.  As an undergraduate, she worked in NSU’s Recruiting Office for four years where she was a Student Ambassador and gave tours to prospective students.  A talented vocalist, she was crowned Miss Northwestern-Lady of the Bracelet in 2010 when her fellow contestants voted her Miss Congeniality. She was a member of Sigma Sigma Sigma Sorority. She worked as a digital media reporter for the Louisiana Sports Hall of Fame in Natchitoches and was the in-game host for the New Orleans Saints and the New Orleans Pelicans.  She was a frequent visitor to Northwestern State and supported the NSU Foundation as a Columns Fund member.  McCord and four others died in a plane crash Dec. 28, 2019. 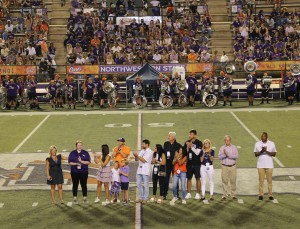 The family of the late Carley McCord congratulated Caroline Bland of Shreveport as the inaugural recipient of the Carley McCord Memorial scholarship. The announcement took place during halftime of the Sept 18 football game. Also on hand were Director of Development Jill Bankston, Director of Athletics Greg Burke and NSU Interim President Dr. Marcus Jones.

A high school volleyball player and student athletic trainer, Bland said she was drawn to sports media because of her life-long love of athletics. This semester she began a student job in NSU’s Sports Information Office where she helps cover football and volleyball.

“I would like to tell the McCord family that I am so thankful to be thought of for this scholarship. Once I got into this field in Spring 2020 I looked up all different female sports journalist and Carley was one who stood out to me. I read up on her and all of her accomplishments and I really looked up to who she was and I aspire to be like her,” Bland said.

“Caroline has jumped in with both feet since coming to our office. Her work ethic has made a quick impression and is reminiscent of Carley’s passionate, professional drive to do whatever she could to the best of her ability,” said Sports Information Director Jason Pugh.