Established in 2008, the Extra Mile Scholarship was created by David Morgan, a 1973 graduate of NSU and alum of the Beta Omicron Chapter of Pi Kappa Phi.  Consideration is given to those who distinguished themselves in academic success, chapter leadership, campus involvement and part-time employment.

The Sherry Fargerson Morgan Extra Mile Scholarship recognizes academic performance while encouraging active and sustained engagement at NSU, the Natchitoches community and within Sigma Sigma Sigma Sorority.  The scholarship was established in 2017 in honor of Mrs. Morgan, NSU graduate and alumna of the Alpha Zeta Chapter.  The award is presented to collegiate members who best exemplify the ideals of scholarship, service and character.

Earlier in the day, the Morgans announced a donation of $1.5 million that will go toward Northwestern State’s new athletic strength and conditioning facility, which will be christened the David & Sherry Morgan Health Performance Center. The Morgans’ gift is the single-largest private gift in Northwestern State Athletics history. 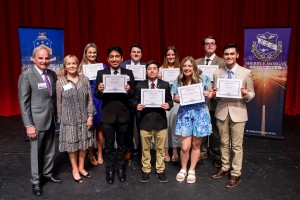 David and Sherry Morgan also presented members of Sigma Sigma Sigma Sorority and Pi Kappa Phi Fraternity with First Generation Scholarships for being the first in their families to attend college. On the front row from left are David and Sherry Morgan, Jonatan Jimenez, Emmett Nobles, Josephine Martinez and Javier Garcia. On the back row are Gabriella Lawrence, Travis Jimenez, Abigail Lawrence and Trace Anthon. 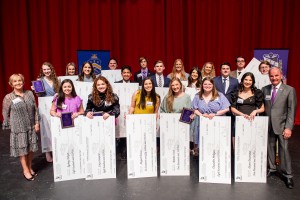