NATCHITOCHES – Northwestern State University and the Natchitoches Area Chamber of Commerce hosted a ribbon-cutting Wednesday for the grand opening of Steak ‘n Shake, the university’s newest dining option.  Steak ‘n Shake is located in a newly renovated space on the ground level of the Sylvan Friedman Student Union, 185 Sam Sibley Drive.  Access is also available through the Student Union. 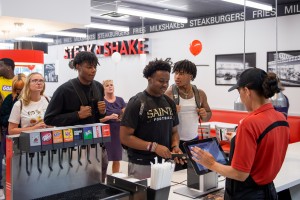 Students lined up to place the first orders at the Steak ‘n Shake that opened on the Northwestern State University campus Wednesday. The restaurant is open to the university community and the general public. 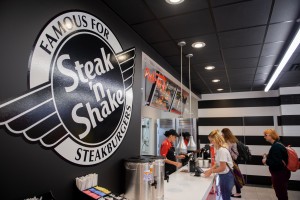 The Steak ‘n Shake restaurant at Northwestern State is located in a newly-renovated space on the ground floor of the Student Union. Thirty-minute parking will be available near the Sam

The new eatery is the first Steak ‘n Shake to open on a college campus in Louisiana,  according to Shane Norman, Steak ‘n Shake business development officer, and was developed in partnership with Sodexo, NSU’s food service provider.  Ron Guillory, a 2001 and 2003 graduate of Northwestern State, represented Sodexo, where he works as vice president of operations.

Maggio said this is the third in ongoing initiatives to bring new dining options to students that began with the opening of Starbuck’s/Café DeMon on the Natchitoches and Shreveport campuses and Chick-fil-A on University Parkway.

Steak ‘n Shake’s menu features primarily burgers and hand-dipped milkshakes, though other entrees, side items and drinks are also available. The restaurant will be open long hours and on weekends so students and the public alike can enjoy the premium burgers and shakes. The location will accept student declining balance as well as cash, credit cards and SOGO gift cards that are accepted at all Sodexo locations on campus.

To learn more about the menu or to find additional information on Steak ‘n Shake, visit.www.steaknshake.com.