NATCHITOCHES – Musician, music educator and conductor Kevin Tison announced the creation of a scholarship for a Northwestern State University student musician.  The Kevin Tison Endowed Scholarship in Piano Performance will be awarded to a Louisiana resident (a graduate of a high school in Louisiana) pursing studies in piano performance who maintains a grade point average of 2.8 or above.  The scholarship will also be based on recommendations from the director of the School of Creative and Performing Arts, application and audition.

Tison announced the scholarship during a weekend visit to Natchitoches, which included his joining fellow alumnus Clarence Frank Jr. in performing Tchaikovsky’s “Piano Concerto No. 1” with the Natchitoches-Northwestern Symphony Orchestra. Tison was guest pianist and Frank, conductor of the Baytown, Texas, Symphony, was guest conductor.

“I came to Northwestern and experienced some of the most incredible training I’ve ever had,” Tison said.  “I had amazing mentors and significant opportunities that have been a large part of my success as a musician.”

Hannah Potter, a senior from Keithville, is the inaugural recipient of the scholarship.

Potter is majoring in piano performance and transferred to NSU from Bossier Parish Community College.  She plans to continue with graduate studies in piano pedagogy and performance at NSU while working as a recruiter for BPCC@NSU and also continuing to teach piano lessons with Natchitoches Music Academy and in Benton, where she is the church accompanist at Benton United Methodist Church.

“I wanted to make music instruction available to the community, so that young musicians can have the chance to develop their talents,” Potter said. “I currently teach students from ages 5 to 65 and look forward to offering group classes in the summer months. I am incredibly grateful for all my professors at NSU and BPCC who gave me a chance to learn music. The faculty at NSU are incredible and I would encourage students to strongly consider NSU.” 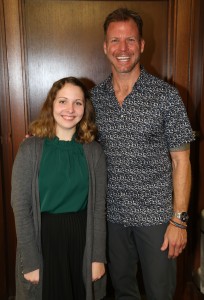 Hannah Potter of Keithville is the inaugural recipient of the Kevin Tison Endowed Scholarship in Piano Performance. Potter, who plans to pursue graduate studies in piano pedagogy and performance, is an active piano teacher and accompanist. Tison has had a successful career as musician, music educator and conductor.

Tison included in the endowment stipulations for a planned gift in which the future bequest will be renamed the Kevin Tison Endowed Memorial Scholarship in Piano Performance.

“We are eternally grateful for Kevin’s generosity that will benefit current and incoming students and also for including Northwestern in his estate plans, enabling the scholarship to assist students for generations to come,” said Director of Development Jill Bankston.

As an undergraduate, Tison was deeply entrenched in musical performance, as a part of the Spirit of Northwestern Demon Marching band, choirs, ensembles and as an accompanist, in addition to his piano studies.  He has maintained ties to his former teachers, mentors and friends from NSU and has a large family in central Louisiana where he grew up. Many were in attendance for the Nov. 14 concert.

Tison began his musical education with piano study at the age of 13.   After becoming his church’s pianist just one year later, it became apparent that piano was going to be a lifelong passion.  Over the past 30 years, his professional work in music has spanned various roles as a conductor, educator, pianist, arranger and vocalist.  He is in his 20th year teaching high school choral music, the past 17 years at Fountain Valley High School in Orange County, California.

Tison earned his Bachelor of Music from Northwestern State and a Master of Music from Texas Christian University in Fort Worth, both in piano performance. Additional concentrations of study were pursued in the areas of voice, composition, orchestration and conducting.   During his time at TCU, his greatest honor came when he was the only American selected as a performer at the renowned Van Cliburn International Piano Institute (1995), performing Samuel Barber’s “Sonata in E-flat minor, Op. 26” in a masterclass with John Browning.

At the conductor’s podium, his work has been extensive and varied from orchestras and choirs to directing musical and opera theater.   He has also been featured as a performer on organ, harpsichord, French horn, percussion and voice, in addition to piano.  Before teaching, Tison served as music director of various churches throughout Louisiana, Texas and California.   He has been nationally recognized and published as a composer and arranger with his works being performed by symphony orchestras across North America, most notably a holiday pops concert premier in 1997 by the Nashville Symphony.

Tison’s work as an educator, clinician, adjudicator and performer has been featured in MENC’s Teaching Music magazine.  He has also been named an Orange County Arts Educator of the Year along with many other acknowledgements across California and the nation.  Tison has conducted at National Conferences of the American Choral Directors Association (ACDA) in Chicago (2011), Minneapolis (2017) and most recently at the Western Division Conference in Salt Lake City, Utah, in March 2020.

In addition to his classroom work, Tison is passionate about educational travel.   He serves as part of the Perform International team as an artistic advisor and production assistant, helping develop choral music festivals and other international performance opportunities.

Making his home in Long Beach, California, Tison loves spending time with friends while enjoying the ocean, mountains and deserts of southern California.   He is an avid pilot, triathlete, diver, hiker and national park enthusiast, always packed and ready for the next adventure.