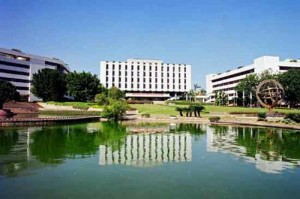 NATCHITOCHES – Zoe Almaraz is a Northwestern State University student studying abroad at the Shenzhen University in China this semester, her first time studying abroad and being out of the country. A New Orleans native, she’s a Criminal Justice major minoring in English because of her passion for writing. This is her story of studying abroad as it is happening.

The International Student Resource Center will be providing updates and information on Zoe’s semester abroad in China, as well as information about opportunities for NSU students to study abroad.

Zoe decided on China for her study abroad opportunity for two reasons.  She wanted to go “as far away from America as I could” while she still had the chance to go and it wasn’t expensive and she was “consuming a lot of Chinese content,” such as films, television shows, music and wanted to see the culture firsthand.

She says the process to getting to China wasn’t that difficult but included a lot of deadlines and paperwork. The hardest part for her was the visa process because of the journey to Houston to drop off and retrieve her passport/paperwork. Deciding to go in the fall break of her third year at NSU, she had enough time to meet the deadlines and fill out all necessary paperwork, which led to her journey to China.

This was her first time out of the country and flying for that long made her a bit nervous, but she still had excitement to arrive. All of this was a “very new experience” for her. She says that when she got off the plain, “it was slightly overwhelming” because she didn’t have any cell service and it was midnight there. She had to speak to airport staff to find out how to obtain the WiFi, so she could contact one of the faculty members who had continuously been helping her with the process of studying abroad. She also says the language barrier in the airport made it a bit difficult because many of them didn’t speak English, but she managed to make it to the university just fine.

At the university, she says that her first week made her feel “isolated at times” because her roommate wasn’t there yet and she felt alone. She thinks she’s adjusted by now to the university and living there. She managed, with the help of student volunteers, to register for classes and set up her bank account and phone. She’s met a lot of people from various places, including Korea, Pakistan, Nepal, Kazakhstan and more. She says she’s “gotten to try not only Chinese food and culture,” but also Korean and Japanese cuisine. Zoe will continue to adjust and try new things at the Shenzhen University and abroad in China.

For more information about studying abroad, visit Russell Hall 227 and speak with Dr. Telba Espinoza-Contreras or Vivian Pedroza about opportunities to go abroad.